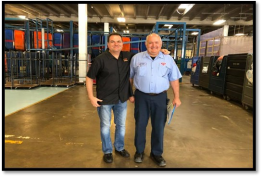 A message from Joe!
NATIONAL FIRE PREVENTION WEEK IS OCTOBER 7TH THROUGH THE 13TH
FOR YOUR HOME, ARE ALL YOUR SMOKE DETECTORS & CARBON MONOXIDE SMOKE DETECTORS PROPERLY PLACED & HAVE YOU RECENTLY TESTED THEM? *
NOTE: Carbon Monoxide Detectors/Sensors must be replaced every 3-5 years!

In 1925, President Calvin Coolidge proclaimed Fire Prevention Week a national observance, making it the longest-running public health observance in our country. During Fire Prevention Week, children, adults, and Teachers learn how to stay safe in case of a fire. Firefighters provide life saving public education in an effort to drastically decrease casualties caused by fires.

Fire Prevention Week is observed each year during the week of October 9th in commemoration of the Great Chicago Fire, which began on October 8, 1871, and caused devastating damage. This horrific conflagration killed more than 250 people, left 100,000 homeless, destroyed more than 17,400 structures, and burned more than 2,000 acres of land.

THE IMPORTANCE OF OUR FAST FIRENET RADIO NETWORK

On April 7th, , at 23:39 hours, Jade Alarm Command Center Dispatcher Rhonda received a fire alarm signal
from Walker Towel and Uniform that covered the soiled linen area’s Smoke Beam Sensor. The fire department dispatchers were immediately contacted and fire crews were on the way to the 132 year old company’s headquarters. Later, while Jade Alarm President Joe Pfefer and several Jade Alarm technicians were in the parking lot having temporarily effected alarm repairs, so the building alarm could be set, the Kansas City Missouri Fire Chief came up to them, turned to Walker Towel Owner, Hal Shapiro and said “Mr. Shapiro, in another 30-seconds I would have had to pull my fire crews off your roof and pulled away for safety’s sake. If not for the speed of the alarm system and Jade Alarm’s dispatchers getting us here as quickly as they did, we could not have saved your building as the sprinklers could not keep up with the fire.”

Jade Alarm’s radio network immediately responds and the alarm signal shows up on our Command Center’s
Computer screens. Those 30-seconds, that older alarms require to communicate their signal would have, in
the case of Walker Tow-el, would have been 30-seconds too long! Losing their headquarters to the fire
would have been at the very least traumatic to the 132 year old family business and every employee’s job
would have been at risk that day.

It is that awesome responsibility each and every Jade Alarm employee understands and appreciates!! Smoke Beam, also known as Projected Beam Detector, is a specialized, commercial grade smoke detection sensor utilized in warehouse or religious institutions that is of European design. The area of coverage is 330’ x 30’ on ether side of the detector’s invisible beam path. Jade Alarm started installing Smoke Beams when House of Lloyd’s Vice President, Saul Kass (of blessed memory) asked us to come up with a system that would meet their insurance company’s requirements of a cross-zone system— as it would take 2 separate fire alarm zones triggering to cause the fire protection sprinkler system to fill the sprinkler pipes. After we had completed the Grandview Warehouse and then Botts Road Warehouse installations, the fire beam US field representative informed me, “Joe, you realize, Jade Alarm Co. has now installed more Smoke Beams for one company than any other alarm company in the world!” What a great honor!

“Thank you so much to our vendor partner JADE ALARM! They saved our back side thanks to their amazing smoke detection beams. Thanks to Joe, Keith and staff!”
– Quote from: Facebook-Excel Linen Supply